The 25 cities that were named the Global Cities of the Future by fDi magazine are undoubtedly world leaders in foreign direct investment, building projects, economic potential, per capita GDP, low unemployment rates, and technology. How well does this translate into the cities’ digital marketing, digital strategies, and internationalization? Are they doing as well online as they are offline? Let’s find out.

In the original article ‘fDi’s Global Cities of the Future 2016/2017’ Singapore retained its title of the Global City of the Future in 2017 followed by London and Dublin. fDi ranked cities based on parameters such as the number of inward Foreign Direct Investment Projects, Economic Potential, Business Friendliness, Human Capital and Lifestyle, Cost Effectiveness and Connectivity to find the top 25 cities.

DesigningIT often stands at the intersection of business metrics, marketing, and technology, so the team was curious how these top 25 cities are doing digital marketing for their cities. In order to find out, the team set out to analyze the 25 websites and social media accounts in regards to their international digital marketing.

Let’s, first of all, take a look how the 25 cities present themselves online*:

As a reminder, let's have a quick look at the ranking from the fDi magazine article, which is based on economic parameters. 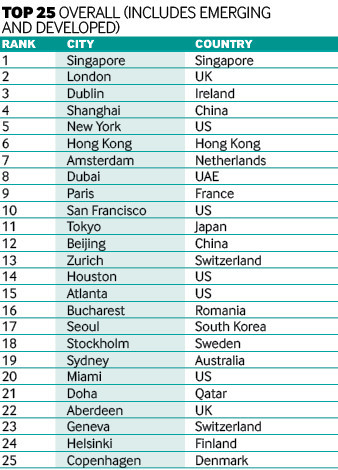 Now let's see how the 25 cities compare to this table when it comes to digital marketing. We start with visitors and website traffic:

The table below shows the total number of visitors per month and web traffic by country.

The total number of visits differs greatly for each city. Six websites get more than 1 million visitors per month and four websites get fewer than 90 thousand. The Shanghai website is among the bottom 4, although it takes 4th place on the fDi list.

Singapore ranks first on the fDi's list, but ranks 6th for the web traffic parameter, with 1.1 million website visitors per month. The last city from the fDi list, Copenhagen, ranks in 11th place for web traffic with almost 700k visitors.

On average 72.46% of the traffic comes from search engines. This means that SEO plays a huge role for these websites. In the next point, we’ll explore who is doing well with SEO, and who is making mistakes.

Below is a table with Domain Authority score, Desktop Speed score, Mobile Friendly score, and a general On-Page Optimization SEO score. The scale ranges from 1 to 100 with higher numbers being better.

The websites are sorted by Domain Authority score. The average DA score is 47.6 which is a pretty good metric. Also, it is interesting to note that the DA score doesn’t differ too much between these websites.

The top 3 websites by DA (London, Hong Kong, and Dubai) have a high On Page Optimization score and have the most visitors. This means that SEO matters and these websites are actively working on improving their SEO. One area for improvement for Hong Kong and Dubai is their mobile friendliness score which is relatively low.

Mobile optimization seems low for most websites in this study. 47.2, which is the average score for all cities is below what Google accepts as a passing score for mobile readiness. According to StatCounter, mobile and tablet devices accounted for 51.3% of Internet usage worldwide in October 2016 compared to 48.7% by a desktop. And this number will continue to grow.

In addition to organic traffic through SEO and search engines, we found that some of the reviewed websites use paid Google Adwords to drive traffic.

The top 5 websites are Sydney, Houston, Singapore, Miami, and Dubai. They get more traffic from Google Ads than other cities and spend the most money on it. Also, they use Display Advertising and a huge amount of keyword variations in paid advertising.

Users not only prefer a mobile-optimized website, they also prefer a website that is translated into their native language or at least is available in English.

Let’s have a look at how the top 25 cities internationalize and localize their websites:

Let’s now review their online presence on social media platforms such as Facebook and Twitter. It is interesting to see how much social engagement on both platforms differs. Also, higher ranked cities do not necessarily have a larger social media following. The second city on fDi’s list, London, doesn’t have as many followers on Facebook as the city number 19, Sydney. And the third city, Dublin, has fewer followers than almost everyone on this list.

Here is the chart that shows the number of followers of each city on Facebook. Cities are in fDi’s order. The 1st city is Singapore, 2d - London, 3d - Dublin, etc. This data was collected on November 20th, 2017.

As you can see Dubai has the most followers - more than 6 million. The next most popular account is Hong Kong’s. It has 3.5 million followers. Also, Singapore, Sydney, and London have more than 1 million followers. All other cities have much fewer followers even though they take a higher position on the top 25. The city of Shanghai doesn’t have a Facebook account at all. At the same time, Beijing has an account with more than 700k followers. But Shanghai ranks fourth on the FDI list and Beijing takes only 12th.

Twitter is less popular than Facebook. Nobody has more than 600k followers. The most popular account belongs to London with 594k followers, then New York, and Hong Kong with 466k and 459k followers respectively.

We can see that Hong Kong and Sydney are equally active on both platforms. Shanghai also doesn’t have a Twitter account. The least active cities on both platforms are Tokyo, Zurich, Bucharest, Stockholm, Aberdeen, and Geneva.

Next, let’s find out how many website visitors each website has and where they are coming from.

Let’s sum up the article with a design score. Our team reviewed each website and came up with an average design score.

It is interesting that the websites from the lower half of fDi list are in general more attractive compared to the leaders. The ‘best’ design is found on the New York and Doha websites. They both received a score of 9, almost the same are the websites of Stockholm and Copenhagen both with a score of 8.9. The worst designs were found on the Beijing and Bucharest websites, which scored only 4.5 and 3.5 respectively.

Good International Digital Marketing is a constituent of success. All aspects are important. Good SEO and internationalization make you visible. Easily accessible outside your native country website and a good, user-friendly design makes visitors more likely to stick around and choose your site over others. 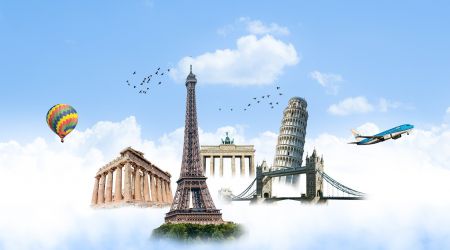